With my concentration turned to film photography, birding was far more relaxed after we’d returned from North America.

We visited Dev for a weekend in Woking and spent much of the two days at Thursley and Frensham. Starting at Thursley Dartford Warblers were found easily, as was a perched Woodlark. Talking to a small birding group we encountered, they mentioned a Redstart in the area near to the Parish Field so we decided to have a look for ourselves. As we walked along the path alongside the field we were surprised to find a flock of Brambling in a tree ahead of us. They flew off before we’d managed to get extended views, but as we turned the next corner the Redstart – fine male – hopped out onto the path in front of us. Unfortunately I wasn’t able to get any photos before it disappeared. In the afternoon we went to the football to see Woking against Torquay.

On the Sunday it was a good walk around Frensham, between the ponds. The main target was the female Ring-necked Duck that had been staying on the Little Pond. It took a while but we eventually had good close views, and a Kingfisher flew past and landed in amongst the reeds. Out onto the heath areas we had further Dartford Warbler views. Several Treecreepers were also noted.

The next notable birding was a warm morning on the local patch where we caught up with a White Wagtail and female-type Black Redstart on the riding paddocks. We don’t head that way often but it was well worth it. Back on the Reservoirs we had good views of a Brambling by the anglers’ hut and a Little Ringed Plover on Number Four Reservoir.

Working the way through May brought us several summer migrants on the Reservoirs. The regular Scaup was still around on Number Four, and it was joined briefly by a drake Garganey and two Black-necked Grebes (both requiring after-work visits during the week). A single Wheatear was found on the East Warwick.

A morning on Ashdown Forest brought us a stunning male Bullfinch and a close encounter with a Tree Pipit. Cuckoo was heard very close, but we just couldn’t get a glimpse of it before we ran out of time and had to head back. There were at least a couple of Redstarts around too, plus a very pale Common Buzzard.

The Cuckoo mission – something we put considerable effort into every year – took us to Fishers Green up the Lee Valley. Unfortunately we failed with the Cuckoo but we did instead get Nightingale onto the yearlist. We know exactly where to look for them and were expecting to have to make-do with just a heard-only record but I did see one briefly fly between two bushes. It was only my second actual view of one in the UK.

More reservoir birding brought another drake Garganey, this time on the East Warwick one evening.

An afternoon walk at Bramfield for film photography brought us at least one calling Cuckoo. We initially thought we saw it in silhouette on top of a distant pine tree, but further consideration when we got home led me to think that it was probably something else – a corvid, most likely. But we knew Cuckoos were there, so we returned the following weekend and we were finally rewarded with a fine male calling from a tree. One of these two trips also got us a couple of Yellowhammers, plus our first ever self-found Yellow Wagtails. Although there can be plenty of Yellow Wagtails on the Reservoirs every spring, we never seem to see them. I’ve only ever seen them in the UK when on guided birding trips, so finding our own in Bramfield was particularly nice.

In early June Jem’s dad was involved in a race in Norfolk and so her parents had decided to make the most of it and book a small lodge in Welborne near Dereham for a few days. It had a spare bedroom so they invited Jem and I to stay with them. We went up by train to meet Jem’s parents in Norwich on the Saturday evening because I’d had a driving lesson – my first time behind the wheel on a public road in more than twenty years – earlier in the day, and the highlight was seeing our first Barn Owl of the year just as the train was coming into Wymondham. An evening walk brought us some Brown Hares but not a lot else. The Sunday was hot and sunny so we spent the morning wandering around the nearby lanes whilst Jem’s dad was off racing. There were plenty of singing Yellowhammers, plus Common Buzzards and Red Kites. There was also a pair of Bullfinches frequenting the garden of the lodge. In the afternoon I went for a walk on my own, photographing the Buzzards and Common Whitethroats in the sun. Towards the end of my walk I found Grey Partridges on a golf course on one side of the road, and Red-legged Partridges on the other side. A Hobby also flew overhead. In the evening Jem and I went out so I could take some large format photos, and a Little Owl called from a nearby tree. I also had my bat detector with me and we recorded the usual Pipistrelles and, more-excitingly, also a Western Barbastelle. Unfortunately the Monday, Tuesday and Wednesday were horrific. It poured all day on Monday so we went out to visit Wymondham Abbey by car (and still got soaked). On Tuesday we decided to give Titchwell a go but the weather was even worse with pouring rain going horizontal in the wind. From Parrinder Hide we scanned around, eventually adding Mediterranean Gull and Bar-tailed Godwit to our yearlists. Jem and I have been to Norfolk lots of times now but this was by far the worst weather we’d experienced. We headed home on the Wednesday, adding nothing else bird-wise. It had been a very nice break for the first couple of days but the weather really affected the rest of the trip. Never mind. 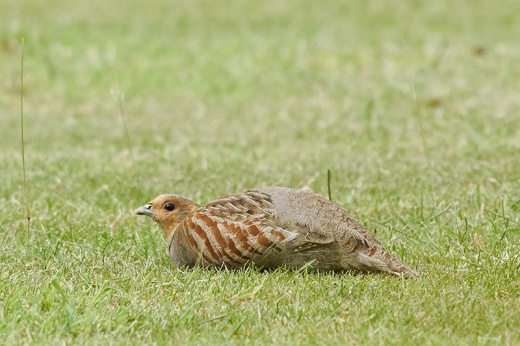 Later in the month it was back to Ashdown Forest for an evening with the Nightjars. We succeeded, and also succeeded with roding Woodcock too, but there was much less action when compared with our visits last year. Tawny Owl was heard hooting as usual, but no glimpses.

It was around this time I came down with shingles, which kept me in for a short time. In July we had a work summer party at West Lexham in Norfolk, not far from Thetford, and although I wasn’t able to partake in the outdoor pool fun, I did spend some time wandering the grounds enjoying the mostly-invertebrate life and flocks of Goldfinches. In the evening I did some bat recording in the trees – lots of Common and Soprano Pipistrelles – but the rain arrived before things got darker and I gave up on my Barn Owl hunt.

With the exception of Birdfair, August saw very little in the way of birding. A few walks around the Reservoirs, but most of our weekend days out were centered around just enjoying the weather and also doing more large format photography (I’m working on a separate blog for that). We’d had a day down at Beachy Head in July, and this month we had a day down at Rye. What we did get was a distant view of Whinchat down on Walthamstow Marsh, and a very brief view of a Pied Flycatcher in the trees by the Lockwood one evening.

A day out at Amwell brought us a Bittern and Common Sandpiper, but the highlight of this late part of the summer was a stunning male Redstart that stayed for a day at the bottom of the West Warwick – luckily Jem and I managed to get down there after work and just before the sun had gone down.

Next up, our annual trip to Norfolk…