As October came around, so did our annual trip to Norfolk.

We went up by train as usual, via Cambridge to Kings Lynn, and then got the bus across the coast to Wells. After settling in we went out for a walk down via the quayside for lunch and then I went alone to the edge of the saltmarsh to the east of the town with my large format camera to try to get some sunset compositions.

Marcus picked us up after breakfast and we made the very short trip along to the lane just behind the saltmarsh where I had walked to the previous evening. Straight away there was a Great Egret nearby, and then we managed to get onto a Greenshank in one of the channels. There were plenty of other waders here – Redshanks, Curlews, etc, and some Brent Geese. A couple of Ruff where also on one of the pools and then a Sparrowhawk zoomed through, spooking everything. We also managed to get onto a Yellowhammer before heading out eastwards along the Warham Greens path towards the Whirligig. Pink-footed Geese, Golden Plovers and a Marsh Harrier were seen here, and despite a no-show for the Dusky Warbler that had been here previously, we did manage to get onto a close-by Ring Ouzel in some bushes. Eventually Marcus also managed to pick out a Whinchat in the low scrub.

We had lunch at the Wells Beach car park and picked out some Oystercatchers, a Grey Plover, some Bar-tailed Godwits, Turnstones and a Sanderling from near the lifeboat station. We heard a Bullfinch too, but I couldn’t get onto it myself. Then we headed around the eastern part of the woods to look for Yellow-browed Warblers. One was heard amongst a tit flock, but the whole flock was very mobile in the breeze. Coal Tits and Goldcrests were seen well, but not a great deal else so we headed back to the car.

The afternoon was finished off at Stiffkey Fen. One Spoonbill was there, along with some Little Egrets and a flock of Black-tailed Godwits. A Kingfisher zoomed past – we’ve seen them often here – and the highlight were three distant Red-breasted Mergansers. Not a spectacular day of birding in breezy conditions, but it had been very enjoyable.

The weather wasn’t much better on our second morning of birding, and we headed out westwards to Titchwell. There were plenty of tits flocking in the trees near the visitor centre and another Yellow-browed Warbler became the second heard-only record of the trip. There was Pintail in one of the first pools and a Marsh Harrier in the distance. Avocets were seen out on the Freshmarsh, and a Peregrine passed overhead. More Godwits of both species down on the beach, along with one Knot, and a young Gannet flew past over the water. A Grey Phalarope had arrived the previous day at Thornham Point so we headed off along the windy beach in the hope of having a look. Luckily it was still there and happily feeding around a pool by the Point. After a good time spent watching the Phalarope we headed back to Titchwell and had a sit-down in Parrinder Hide. There wasn’t a lot more than we’d seen earlier, but there were a few Ruff and more Avocets visible this time. As we headed back along the path towards the visitor centre something was attracting a small crowd ahead of us – a Water Shrew happily munching on a snail. It wasn’t bothered by all the feet clumping past and we managed to get plenty of photos before heading to the picnic tables for lunch. As we ate, a handful of Siskin flew overhead. After lunch we headed out to Patsy’s Reedbed, but there wasn’t a great deal there aside from another Pintail and a young Mediterranean Gull which briefly flew in with some Black-headed Gulls.

Marcus is always good at figuring out plans which avoid the worst weather, and as the rain approached he got us all together and ferried us off southwards towards the Brecks. On the way a covey of Grey Partridges crossed the road. When we got down to the Brecks we positioned ourselves at the corner of one of the pig farms to look for Stone Curlews. As always, it was almost impossible to spot any to begin with, but once we got our eye in we found several. Marcus picked out both a Yellow-legged and a Caspian Gull in the pig fields, but the only view was with his scope up at height, and it was too high for Jem and I to get to. A Marsh Tit called in a nearby bush, but kept out of sight. We drove around to the opposite side of the field to scan for the Stone Curlews again in case there were more over the other side of the ridge. We each took turns in scanning along with the scope and trying to count – eventually settling on a total of 28 birds. Marcus had been right about the weather, and as we headed back northwards we drive through torrential rain. It had been a very well-planned, and fruitful day’s birding. 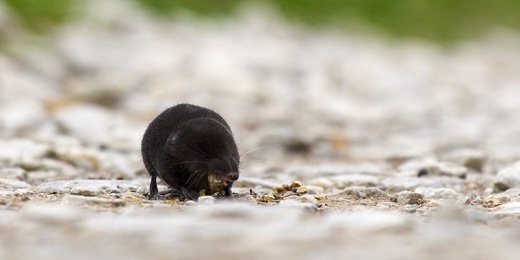 It was still cloudy and grey, but less windy and much drier. We started at a spot I hadn’t been to before: Sheringham Cemetery. The idea was to look for Ring Ouzels and Yellow-browed Warblers which had been seen the previous day. On arrival two birders told us the Ring Ouzel had departed earlier, so we tried for just the warbler instead. There was a Green Woodpecker down on the grass, and then a significant tit flock containing Long-tailed, Blue, Great and Coal Tits, plus Goldcrests, which circuited the cemetery. There were a few Blackbirds and Song Thrushes too. Eventually it was Jem who spotted a warbler in the trees at the far corner of the cemetery and Marcus confirmed it was the Yellow-browed so we were all happy with that. After a while we decided to leave the cemetery and head down to the promenade where we had excellent close encounters with a large number of Turnstones. There were also Razorbills, a Guillemot and some Gannets out to sea, and a single Red-throated Diver which flew east. On the way back westwards we stopped at Walsey Hills just across the road from Cley. The main target was found quite easily – a Jack Snipe on the pool – and then we headed into the wooded path where there were plenty of Chiffchaffs, a Blackcap and another Yellow-browed Warbler.

We had lunch at Cley and watched a flock of Ruff, a Yellowhammer overhead and a Marsh Harrier. Marcus had heard that there had been a Hooded Merganser at Titchwell earlier in the morning so, as it was reported to still be there, we headed back westwards to have a look for ourselves. It was more like a proper twitch as there were plenty of birders present at Patsy’s Reedbed. The Hooded Merganser was there and happily swam along the foot of the reedbed several times until distant shooting scared it off with all the other ducks. It did come back down in another part of the reserve, whilst I kept myself busy photographing a close-by Marsh Harrier. We headed along the eastern trail – I think I’ve only ever been along there once or twice before – to look for Bearded Tits and Water Rails. Nothing showed for us there, but we heard calls. There were more Godwits and Avocets to watch though. Eventually we went back across to the main path. Yesterday’s Water Shrew was still there, and the Hooded Merganser had been re-found by the twitchers. We eventually got views of a Water Rail from the Island Hide and eventually got some great close-up views of Bearded Tits in the reeds right beside the path. A surprise Cetti’s Warbler was following them and flitting up into view as they made their way along the reeds. It was a great way to end the day.

The final day of birding was damp and drizzly to start with. We went out to Lady Anne’s Drive as Pink-footed Geese flew overhead. There was also another covey of Grey Partridge near to the car park. Another Yellow-browed Warbler was heard but not seen as we walked along the track and two Great White Egrets were seen in the fields. From Washington Hide we scanned around and eventually found a Ring Ouzel high up in a bush amongst several Song Thrushes and Redwings, as well as a third Great White Egret. The rain stopped for a while so we continued on westwards as a Red Kite floated overhead, and we eventually found a few more Yellow-browed Warblers, but they weren’t very showy. We also began to noticed flocks of Siskins coming in, obviously just off the sea. Marcus estimated we’d seen more than 500 by that time. A couple of Bramblings flew overhead, and we eventually made it to the end of the track to look at the distant Cattle Egrets – at least eight were counted – with another three Great White Egrets. As we clambered over the dunes at the end of the pines more and more Siskins came in, Chaffinches as well. There were plenty more Blackbirds and Song Thrushes, and a Fieldfare too. We headed back to Lady Anne’s Drive and had lunch in the new Lookout Cafe as it rained again, but luckily it cleared up by the time we left.

Then it was off to Friary Hills – another spot I hadn’t been to before. The Siskin flocks had been replaced by smaller flocks of Chaffinches, and there were thrushes and Blackcaps in the bushes. We eventually managed to find another Yellow-browed Warbler in a tit flock and I finally managed to get a photo of one, albeit a record shot only. Some Marsh Harriers were over the Freshes and a young Peregrine soared directly over us. As we got back down to the seawall were pleased to see the Hooded Merganser in the captive collection was still there. As we walked out to scan the harbour we perused the waders on the mud. There were Curlews, Redshanks, Knot, Dunlin, Grey Plover, and Bar-tailed Godwits. As we turned to leave a flock of Turnstone passed over us with some smaller waders amongst them. I thought I’d managed to get a tiny wader that Marcus was interested in in one of my photos, but it turned out to be one of the Dunlins instead – the smaller wader was most likely a Little Stint but it would have to be one that got away.

After breakfast I wandered back down to the quayside to shoot some more large format compositions while Jem relaxed at the guesthouse. Once we were all packed we headed out into Wells for lunch before making our way, by bus and train again, back to London.

In all, it was yet another fine birding tour of North Norfolk. At the time I was expecting that we’d be back again the following year, but a certain virus would have other ideas…