Back in the Game…

The relative failure of last year’s home birding meant I was pretty upset that I’d only managed to get 163 species onto my UK yearlist. My target every year is to at least beat my worst ever total – that feels like some kind of relative achievement – and to not manage to beat 2014’s total of 166 was a bit of a shame, not that it was for lack of effort (and of course a new low now makes future years easier).

So I made the bold decision to set myself a target and get involved with Bird Watching Magazine’s #My200BirdYear challenge. It’s something they set up to encourage people to get out birding more and, although it doesn’t seem to have many set-in-stone rules, I’ve set myself the rule that they must all be seen in the UK. I’m not going to count the feral pigeon either unless I manage to see genuine native Rock Doves somewhere, otherwise I’ll include species from self-sustaining feral populations. At the moment I’m only going to count birds I’ve seen, but I may add in the heard-only species later, depending on how things are going.

With all that said, January got off to a pretty decent start. We began with walks around the Reservoirs, getting such species as Greater Scaup and Peregrine onto the list nice and early. A day out at Bramfield followed with the plan of getting Hawfinch and Brambling as we’d managed to get them both back in December, but this time we couldn’t locate ourselves a Brambling – always a bird that we’ve struggled with. The Bramfield usuals were all there: Hawfinch, Red Kite, Buzzard, winter thrushes, etc, and as we finally began the long walk back to Hertford we had the unexpected surprise of a covey of eight Grey Partridge on the outskirts of the village. This was the first time we’d seen this species in the UK outside of Norfolk.

After visiting Shoeburyness for the first time just before New Year we knew it would be a good place to see lots of good shorebirds, so we spent a good Saturday there, starting on the East Beach in the morning for Brent Geese, Sanderling, Ringed Plover, Redshank, Turnstone, Little Egret, etc, and then moving on to Two Tree Island at Leigh-on-Sea on the other side of Southend after lunch for Avocet and Common Snipe, amongst others. Goosander, Common Sandpiper and Goldeneye were all added on the Reservoirs over the following days too.

The next bird of note was a bit special. A Little Bunting was reported associating with Reed Buntings on a patch of scrub on the Reservoirs one Friday in late January. Jem and I got up the next morning in the pouring rain to see if it was still about, and thanks to a few other local birders, we managed a very brief glimpse before it headed off into the long grasses and out of view. Not great views, but it was enough to see the difference in face pattern, and it was our first lifer of the year (#479 – I thought I’d finished 2017 on 477, but with Lesser Redpoll being finally accepted as a separate species by the IOC, I got an additional ‘armchair’ tick). Over the next few weeks I’d spend a lot of time trying – and failing – to get decent photos of the bird.

I then went out to Staines Reservoir on my own because Jem was unwell one Sunday. Before Christmas a Shorelark had turned up on the causeway between the basins and it soon become apparent that it was probably one of the many North American races. It disappeared for a bit before returning in January. I love Shorelarks but had only previously ever seen one individual – in Norfolk several years ago – so I decided the trip across London would be a good idea. And so it turned out, with the bird showing extremely well and within just a few feet of the path. I failed to find the Black-necked Grebes that were also reported, but I did add better views of Goldeneye while I was there. I finished January with 86 on the yearlist.

The first stop in February was a horrible, grey, windy and damp Saturday at the London Wetland Centre in the hope of getting Bittern and Jack Snipe, and we were fortunate again. Two Bitterns were seen, one in the reeds beside one of the smaller hides, and one on a small island out in the middle of the main pool. After we’d relocated to the top of the Peacock Tower we witnessed the bird on the island suddenly come out onto the crest and perform a bizarre, frantic, snake-necked dance in the wind. Very odd. We got distant and partially-obscured views of one of the Jack Snipes, but it was good enough to see the diagnostics before it padded into some longer foliage. The following day was spent at Amwell where the target was Smew – and we saw at least two, maybe up to four redheads. Loads of displaying Goldeneye as well, and as we left Jem found a cracking male Bullfinch by the towpath. 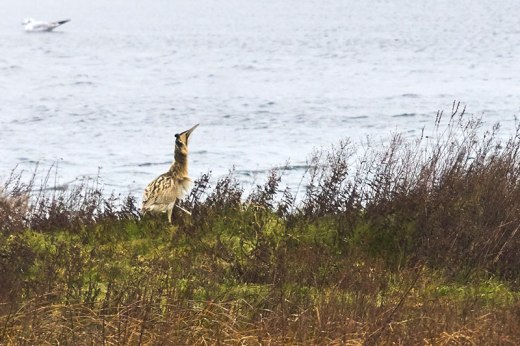 Next was an afternoon walk on Regents Park, specifically to see the Water Rails that have been coming to a feeder in a ditch. On the way we had a good look at one of our local Peregrines perched up on the halls of residence by Tottenham Hale Station. Once we got to Regents Park and found the feeder it didn’t take too long before one of the rails came out and pottered around. We did some exploring and got great views of Great Spotted Woodpecker, Goldcrests, Song Thrush, Coal Tit and Redwing. We heard a Green Woodpecker yaffling too, but I still hadn’t managed to get it onto the yearlist by this stage.

The following weekend we had our first trip to Rainham this year. Birds seem to be getting pretty active by this stage and we got great views of a number of birds perching up and singing. Marsh Harrier and Stonechat were added to the yearlist, as was a Barn Owl just visible in a nesting box and a Ruff flitting about on one of the scrapes. This brought me up to 97 for the year.

A sunny Saturday afternoon was spent on Epping Forest, starting at Connaught Water where we got our first Mandarins of the year. The Goosanders that were there in December appeared to have gone so Jem couldn’t get them onto her list, but despite the main part of the forest that we wandered round being very quiet, I finally managed to get my first Nuthatch of the year before we left. The following day was also nice and sunny, so we spent the morning on the Reservoirs where we got great views of one of the local Kingfishers by the Coppermill Stream, and then headed to Fairlop in the afternoon where we failed to add Little Owl or Green Woodpecker (despite hearing more yaffling). The plan was to try to get 100 species onto the list before the end of February, and luckily the Reservoirs’ early opening times for permit holders began on Tuesday of the final week of the month. I got in at 7am and made a mad dash to the overflow channel at the north end of the site to get Green Sandpiper and finally reach three figures with a day to spare.

Early March saw us try to get Caspian Gull, Great Northern Diver and Woodcock onto the yearlist during a wet afternoon at Fairlop and then Eagle Pond in Snaresbrook. The GND and Caspian Gull weren’t there, and we couldn’t find Woodcock either. We did manage to get a soggy Little Owl though. The second Caspian Gull at Eagle Pond had also gone AWOL, so we had a wander around the nearby woodland and ponds and consoled ourselves with an unexpected bonus of a pair of Lesser Redpoll. During the following week a Serin which had been briefly seen a couple of times on the Reservoirs in February returned and I managed to get a few glimpses one wet morning before work. A couple more early walks around the Reservoirs brought us more Goldeneye and a very nice confiding Dunlin on the Lockwood. I tried a few more times for photos of the Little Bunting in good light, but it didn’t want to show. I did eventually get Green Woodpecker and Cettis Warbler onto the list though.

The next little excursion was a great weekend spent with Dev in Woking. Jem and I got down there on the Friday night as it began to snow. By the time we awoke on Saturday morning there was a decent covering on the ground so we headed off towards Box Hill to look for the enormous Hawfinch flock (720+ individuals). We parked up at the Whitehill car park and walked up to Juniper Top, headfirst into a blizzard. A possible flock of Hawfinch was seen briefly but we didn’t see an awful lot aside from a few small tit flocks in the woodland. When we eventually made it back via Juniper Bottom we saw the flock again – probably only a couple of dozen birds – but they were indeed Hawfinches. Dev drove us up to the visitor centre car park and the feeding station there brought in some great birds: notably Marsh Tit and Nuthatch. Willow Tit was also listed on the board, but that was highly dubious. We then went off to Newlands Corner where we had lunch and another stroll. We were looking for Siskin but had to make do with lots of assorted tits – including Coal and Marsh Tits again – instead. After that it was back in time to watch Woking play Wrexham – a good match which ended in a 2-2 draw. We went for a Korean/Japanese meal in the evening. There was still plenty of snow around on Sunday morning and we headed out to Thursley Common to see what was around. We began with a nice male Stonechat, surprisingly in the woods by the Moat Pond, and then we had a couple of Snipe near the boardwalk. Once we reached the eastern side of Shrike Hill we noticed another Stonechat, and with it a Dartford Warbler. Then we saw another, and then another. They seemed to be everywhere, and were very active despite the snow. After getting plenty of photos we went on a much longer walk than we normally do, in the end finding no fewer than six Dartfords by the time we’d returned, as well as a Raven. The only thing missing was a Great Grey Shrike, but this has been a particularly bad winter for them with few sightings.

The days before we headed off to Scotland on our first trip of the year saw further failed Little Bunting photography attempts, a brief view of a probable Siberian Tristis Chiffchaff, and then on the Friday before we left, David found a Bluethroat on the West Warwick. It stayed all day delighting observers, so we got up early enough to get on site at 7am the next morning (our train to Scotland wasn’t until noon), but there was no sign. Dammit. Did finally get some decent-ish shots of the Little Bunting on the way out though.

Oh well, the yearlist was up to 109 by now and now it was time for Scotland… 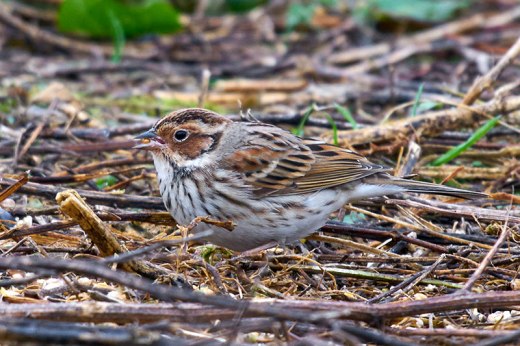