Before I post about our trip to Yorkshire, I’ll explain what’s been going on in the weeks following our return from Finland.

Jem and I moved to a flat in Tottenham Hale at the beginning of June. It’s very handy for both our commutes, and also very handy for watching wildlife. Situated literally in the middle of the River Lee (or Lea, depending on how you wish to spell it) – the river divides into a canal navigation on one side of our close whilst the more natural course is on the other – we have wildlife right on our doorstep. There’s a small nature reserve on the opposite side of the road, and the Walthamstow Reservoirs are just a few yards away. This also gives us easy travel to the many good spots up and down the Lee Valley.

After hearing about the Black-necked Grebes that have successfully bred at Rye Meads we decided it was high time we went back for a visit, especially as it’s now only 20 minutes away on the train.

The grebes were good – not incredibly showy on a scorching hot day – but they popped out of a sheltered area behind an island in front of one of the hides and bobbed around for a bit. I’d never seen Black-necked Grebes in summer plumage before either, so that was an extra visual bonus. The hide was a bit too busy with lots of people wanting a look (Tom and Brian who we met on our Serbia tour in December were there, working hard looking after groups of kiddies), so we decided to relocate to the Kingfisher Pool instead. And it was a good decision too. 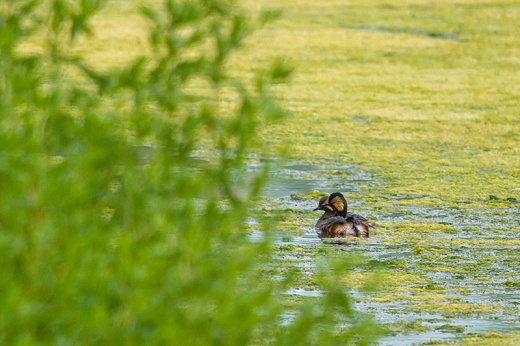 Within a few minutes we had one of the pair perching perfectly on a large branch in front of the hide, before it moved in turn to each of several small posts around the perimeter. Over the next hour we saw both adults – and presumably a fully-fledged juvenile – actively fishing and returning to the nest. Definitely the best views of Kingfishers I’ve had to date. There was also a nesting box full of ready-to-fledge Kestrels attached to one of the pylons overlooking the pond.

After a while we went to the Warbler Hide to see what was happening on the meadow. A Marsh Harrier was the highlight – and it got a bit of a mobbing from a Kestrel too – and there were also several distant Buzzards and a Red Kite. Reed Buntings were flitting amongst the tall grasses while Sedge and Reed Warblers sang from hidden locations. We also got a brief flypast from a Hobby.

On the following Saturday morning we also checked out The Paddock – a small reserve directly across the road from our close. In damp-ish and cool conditions the invertebrate species were a bit more rewarding than the avian. Plenty of damselflies were around – the whole area is particularly good for Banded Demoiselles – but there were also a few birds around, notably Whitethroats up in the trees. I’ve since learned of annually-nesting Sparrowhawks here, so that’s something to keep an eye out for in the future.

Our only other birding excursion of note was a Sunday afternoon walk down the Lee to Walthamstow Marshes. At one stage we saw 32 Mute Swans all together, plus a confiding Grey Heron waiting for scraps of food at the back of someone’s flat. A large Brown Rat was seen, as well as various geese, ducks, gulls and a few Common Terns. At the Marshes themselves we got a newly-fledged Reed Warbler. On the way back to the flat the heavens opened and we got soaked, but it was a good bit of exploration anyway.