I was excited about the plans for the final morning: going out around the Kuusamo area to look for, in particular, Hazelhen, Siberian Jay, Siberian Tit, Red-flanked Bluetail, and possibly more. These constituted four of the five species I wanted to see most on this tour. I’d somehow managed to miss out on Hazelhen when everyone else had seen it the previous day, not to mention missing out on it two Sweden trips, and I’d also managed to inexplicably visit a Siberian Jay feeding station in Sweden on only the second time ever that the birds didn’t show up there.

So I was very excited…but sadly it wasn’t to be. A combination of early mornings, lack of sleep, strange eating times, and wildly fluctuating temperatures had taken it’s toll on Jem and made her feel extremely unwell, so I stayed behind at the hotel with her while the rest of the tour group went out.

After Jem settled I decided to go out for a while. I’d tried to sleep, but knowing the rest of the group were going out without me to look for 80% of the species I wanted to see was causing me inner turmoil. Fortunately, the hotel backed onto a good lake, and at 4am there weren’t going to be too many other people around, despite it being broad daylight. Straight away I found a good male Goldeneye with nice sunrise colours reflecting in the water. I moved on in a clockwise direction around the edge of the lake. This brought me great close-up views of Chiffchaffs, Reed Buntings and Pied Flycatchers (although the latter seemed a bit skittish and I couldn’t get a photo). There was also a Snipe drumming overhead. For those who don’t know, the Snipe has extendable modified feathers which it utilises in its display flight. In the same way that a blade of grass can be blown on to create a kazoo-like sound, the Snipe’s feathers are used to make a bizarre ululating sound. It’s one of my favourite sounds of nature, and the first time I’ve heard it since my first Sweden trip five years ago. 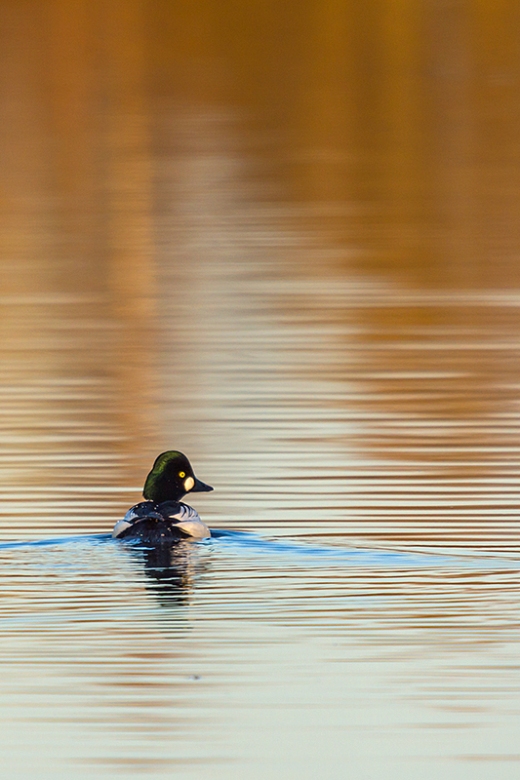 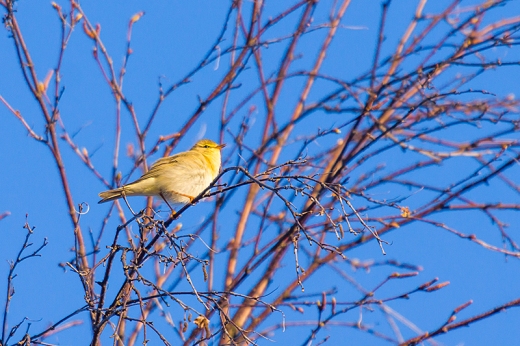 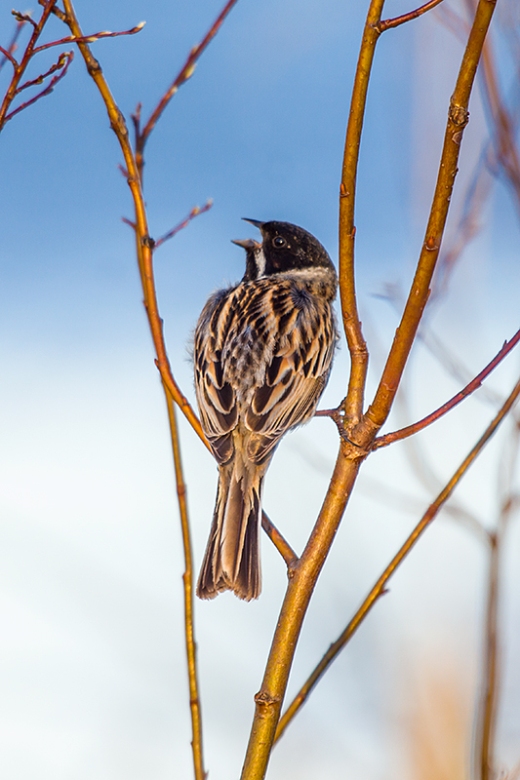 I also heard a woodpecker drumming which got me excited for a few minutes. It sounded too high-pitched to be a Great Spotted, but sadly also too loud to be a Lesser Spotted. I never saw the bird and it eventually made its way off through the woodland, unidentified. I didn’t want to go too far and stay out too long so after a while I turned back towards the hotel.

To finish off the morning walk I got great close-up views of Muskrats having their breakfast on the edge of the sheet ice, and also great views of Goosanders, a species I’d only seen briefly and at great distance before this morning. 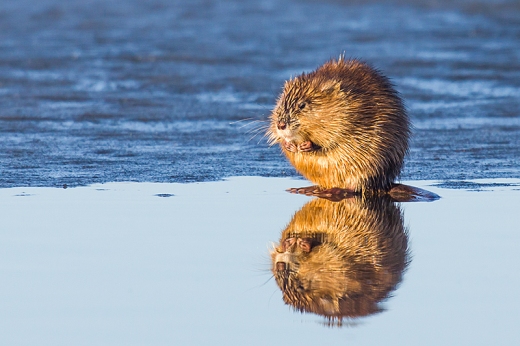 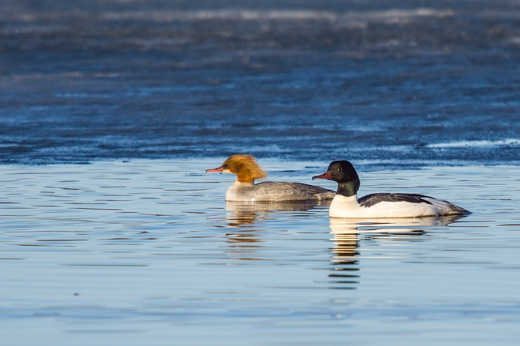 After a while the group returned and we managed to get Jem to force some breakfast down. The group went back out somewhere nearby and Jem and I went for a short walk back down along the edge of the lake. The Reed Buntings and Muskrats were still there, but the Goosanders had gone further out towards the middle of the lake. We watched a nice Red Squirrel and a very vocal Fieldfare before returning to pack our things and start on the journey back to Oulu Airport. On the way we saw some Black-throated Divers too. 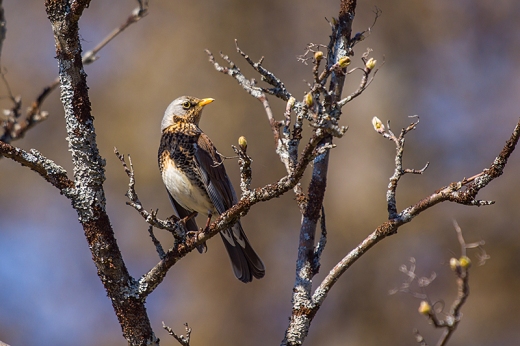 So that was it. I was obviously very disappointed to have missed out on four of the five species I’d wanted to see most (the rest of the group saw them all), and I was also hoping to have got more than two new ticks, but it was a great holiday. If I’d been given the choice of seeing a Hawk Owl or the other four species I wanted, I’d have chosen the owl. Peter also told us that this was the first time since he’d been guiding the tour that they’d managed to get all six of the owl species they were hoping for, so we were incredibly lucky there. The final morning may not have worked out for Jem and I, but the great light and proximity of what I did see actually got me my best photos of the the trip, aesthetically speaking.

The extreme early starts and bizarre fluctuating temperatures (apparently the weather was very unusual) made it a bit too tough on Jem, but as a tour overall I can’t praise it highly enough. We saw great species and had – in most cases – very good views of them. It wasn’t a photography tour, but the opportunities for photography – decent record shots at least – were fantastic. It’s always difficult for tour companies to get the right balance: they want it to be comfortable for everyone, they want people to get the maximum out of it, but they also need it to be economically viable for both themselves and for the guests. In an ideal world I’d have preferred a slightly smaller group – perhaps one larger minibus full, rather than two smaller minibuses – as some species could only be seen from a small viewpoint and I found myself having to wait a long time to get a view of the bird, especially with the first Tengmalm’s Owl, the female Great Grey on the nest, and the male Hawk Owl. The length of the trip was ideal though: I was concerned before we went that it was a bit expensive for only four days, especially as two of those days included our travel to and from London. The long daylight hours and very early starts made it feel as though we’d been there longer, and plenty was packed into those days. In fact, another day may have been almost too much. The guiding was also excellent. Antti knew exactly where to go for each species, and also knew exactly where we should position ourselves in order to see the birds without disturbing them. Peter’s role as co-leader (and driver of the second minibus) worked well, and we always felt well looked-after at all times.

My tentative plan at the moment is to consider returning on my own, maybe on next year’s tour, in the hope I might get to finally see the species I missed this time. I really liked the way this tour was put together, and the pricing was just right too. Alternatively, I might consider contacting Finnature directly and seeing what kind of day trips they can organise. Being a photographer, it might be an idea to see about spending more time at specific sites and concentrating on a few key species, rather than than usual birding schedule of getting as many as possible. The only difficulty there is that I’d have to sort out my own way to Kuusamo, which might not be easy, but we’ll see…