It can’t believe it’s been almost a month since any notable birding, but the weekend weather has just been too miserable. Luckily, the Easter weekend was good enough for me to dust off the binoculars and camera.

Firstly, I visited Richmond Park on the morning of Good Friday as I’d heard there had been a Ring Ouzel there. I’ve never seen one before, and given that it’s David Lindo‘s favourite bird, I though it would definitely be worth checking out. Despite living only a few minutes away by train, I haven’t done a lot of birding at Richmond Park as I find it a little inaccessible by public transport. To get to the area where the Ouzel had been seen, I had to get the train from Putney to Richmond, get a bus towards Kingston, and then a not-insignificant walk towards the Ham Gate. The first – and ultimately best – sight of the day was of a pair of Kestrels either side of the road. One flew straight past me but the other perched obligingly on a small tree, which allowed me to get some nice photos. Sadly, the Ouzel was nowhere to be seen. There were Jackdaws and Parakeets everywhere as usual, and a distant thrush which got me briefly excited before a dog scared it away (I’m 99% sure it was a Mistle Thrush), plus a singing Wren in the foliage, but no Ouzel. I also saw one Great Spotted Woodpecker drumming loudly on a hollow trunk, plus three Green Woodpeckers. Blue Tits and a nice Nuthatch completed the list for the day. 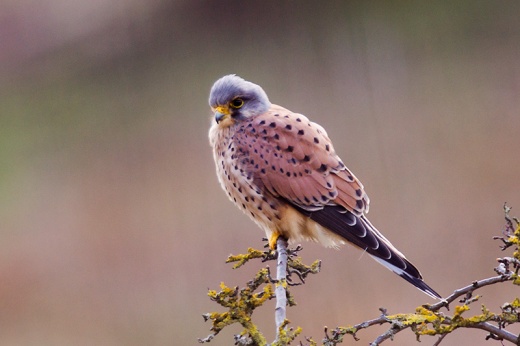 Jem and I decided to visit Rainham on Saturday morning, and we decided to revisit the route we we did on our last visit, from Rainham Station down Ferry Lane and along the river to the RSPB reserve. We got a nice Kestrel and plenty of Linnets on our way down alongside the western boundary of the Marshes and along Ferry Lane itself, and the Black Redstarts were still there too, bringing in several birders, along with a briefly-glimpsed small wader – I think probably a Common Sandpiper. We were just watching a female Black Redstart and a Pied Wagtail in the rocks to the west of the Tilda rice factory when I looked up and got a bit of a shock: a huge raptor sending the factory’s resident pigeons in all directions. This in itself isn’t surprising, but this was no ordinary raptor. This was the Rainham Megafalcon. I’d seen it mentioned on Twitter as well as the RSPB’s Rainham Marshes blog, but nothing prepares you for the first sighting of a an enormous, pale-bellied falcon causing havoc in East London. Despite the bird coming pretty close to us, I was unable to get my camera on it in time as it made its way back across to the opposite bank of the river, where it proceeded to send all the pigeons on that side into chaos too. I lost it in the confusion, but soon saw a falcon shape soaring high above a concrete tower and managed to get one pretty poor long-distance photo, and I’ve got a good idea that it’s the same bird. General consensus – as I discussed with another birder later on who’d also been near the rice factory at the time – is that it’s probably an escaped falconer’s bird, possibly a Gyrfalcon x Saker hybrid. Whatever it is, it’s an awesome sight. 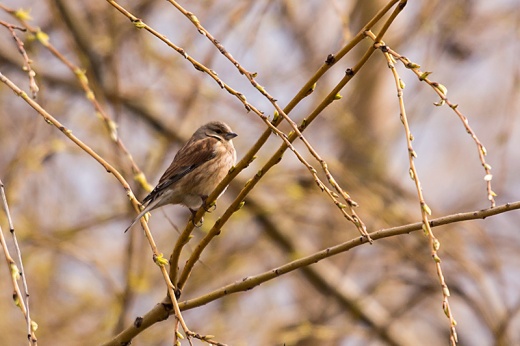 Following this we made our way at high speed towards the RSPB reserve as we wanted to get to the cafe for lunch (and the obligatory piece of home-made cake) before it closed (I went for lemon drizzle). On the way we spotted a Water Pipit in the grasses by the stone barges. I was hoping for Wheatears, but it appears we failed on those. After lunch we saw Greenfinches and a Reed Bunting on the feeders nearby, and a singing Dunnock. We spent the rest of the afternoon in one of the reserve’s hides, where we had the closest views I’ve ever had of Common Snipe and Water Rail. In fact, the Rail was so close to the foot of the hide that I couldn’t even get an angle on it where I could take a photo. There were also a couple of Little Grebes within a few feet of us. It had also started sleeting, which was pretty sudden as I’d been photographing the Snipe in bright sunlight just a few minutes earlier. On the way back to the Visitor Centre we found ourselves some displaying Lapwing and a few waders. They were fairly distant but looked mainly like Common Redshank and Grey Plover, and that finished the day off nicely.

Sunday saw Jem and I getting the National Express coach down to Bristol. The main reason was to see Sheffield Wednesday at Bristol City on Easter Monday, but we went down a day early to see a bit of the city and to stay with two of Jem’s friends. The journey down brought lots of Common Buzzard and Red Kite, plus several Tufted Duck on a pond. Bristol itself seemed to be full of Herring Gulls and Black-headed Gulls, but we saw a nice Peregrine too, as we made our way around the river towards the Clifton Suspension Bridge. A few minutes after we’d lost it behind the hills it returned at high speed, chasing a flock of pigeons and flashing straight over our heads from just a few feet away. Definitely the closest and most exhilarating Peregrine encounter I’ve had to date. A close-up singing Robin was found near the Clifton end of the bridge itself, a probably Kestrel soared across the rooftops and we saw another Buzzard over the trees as our birding for the weekend came to a close. The football was a poor-quality 1-1 draw with Wednesday conceding an injury-time equaliser leaving them still in the thick of the relegation battle, but considering how much better Bristol City had played throughout the match a point should be gladly accepted.