A fine start to the New Year.

New Year’s Day brought about our annual walk over Richmond Park. There were several rather tame Jackdaws on the way through Richmond itself, and once inside the Park we were greeted by the expected Ring-necked Parakeets. A single Common Kestrel – one that I’m sure I’ve seen many times in the past at the same location – went for a quick flyabout, but there wasn’t a huge amount of other things of note, aside from the usual Mallards, Coots, Moorhen and Tufted Ducks, plus lots of very photogenic deer.

The following weekend brought about a Sunday-afternoon walk at Staines Moor, just south of Heathrow Airport. I’d tried to go on a bit of a reconnaissance mission in between Christmas and the New Year as I’d heard there were several Short-eared Owls in the area, plus some Barn Owls. I’d checked the map and decided to take the train past Staines to Wraysbury and walk back on myself to the Moor. Unfortunately, the footpath doesn’t seem to quite make it all the way, bringing me to a dead-end that was tantalisingly close to the Moor but not giving me any views into it because of the M25 being stuck in the way. I thought that all I was going to get on that occasion (aside from very muddy) was a couple of Grey Herons and some far-off gulls. As it turned out I did manage to get some nice views of about a dozen Fieldfares in with about a dozen Starlings. I hadn’t seen a Fieldfare in the UK for almost seventeen years until Jem and I saw some at Fairlop just before Christmas.

Anyway, back to the Staines Moor story. This time I was better prepared. Engineering works meant getting the replacement bus service from Twickenham to Staines, and then we walked through a nice little housing estate and into the Moor. The only route we could find at the time was a footpath along the eastern edge of the Moor, alongside the King George VI Reservoir.

We weren’t getting views of much at all, apart from a few Goldfinches in the trees that separated us from the Moor, and some gulls and Cormorants overhead, but halfway along the unnervingly-direct footpath, I suddenly saw something fly out of a tree to our right, at the foot of the grassy bank that makes up the reservoir wall. I’d seen Short-eared Owls several times during last winter at Rainham Marshes, so I was able to identify it instantly. It circled quite close and then perched obligingly in a tree before circling over us again, before it was joined by a second owl. We noticed other birders up on the reservoir bank (I assume they must have permits) who were also enjoying the show.

After a while we explored up the footpath a bit more, but it was getting dark so we headed back, seeing another owl in one tree and then another two up in a tree on the other side of the path. When I checked Twitter later that evening I found reports of six Short-eared Owls and one Barn Owl on the Moor that afternoon. Hopefully we’ll see some Barn Owls hunting before too long – I’ve never seen them in action before. 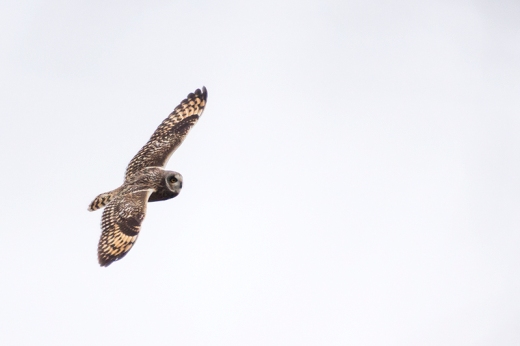 The following weekend took us a bit further afield. First of all, I wanted to try to find myself a Hawfinch. The only time I’d seen Hawfinches before was on David Lindo‘s Serbia tour last April, but although I did ‘see’ several of the birds I didn’t get anything like a good enough look to say I’d really ‘seen’ them. So as far as I was concerned I still needed to tick them off as a bird I’d seen. Thanks to a tip-off on Birdforum, Jem and I decided to check out a small village called Bramfield – a few miles north-west of Hertford. A massive mess-up caused by an app on my iPhone meant we were going to miss the bus from Hertford North Station out to Bramfield, so we decided to walk it instead!

Walking out of Hertford itself brought relatively little aside from Goldfinches high up in the trees, but as soon as we were out of the suburbs and into the countryside things changed dramatically. We started with a pair of Common Buzzards, a flock of Fieldfares, a lone Common Kestrel and a pair of Red Kites (Jem’s first) in the ploughed fields. A bird feeder by a house brought a Lesser Redpoll and Blue Tit, and then an area of scrub/bushes/hedges contained dozens of Chaffinches, several more Lesser Redpolls, about two dozen Yellowhammers, a Jay, and more Buzzards and Red Kites overhead.

A Common Buzzard getting a good mobbing

But I wanted a Hawfinch, and we didn’t have to wait much longer. As we neared the village itself I noticed a single bird perched happily on the top of a bare tree overhanging the road. I quick look through the binoculars showed me the enormous beak and the black eye mask. Photos ensued and I finally had my first Hawfinch (bird #347 in my global lifelist). The finch sat obligingly until we eventually decided to move on into the village. We bumped into another birding couple by the church who said they’d just seen the Hawfinch too. They went off to find the Yellowhammers and Redpolls we’d mentioned whilst we explored the churchyard. It brought us a Goldcrest, Green Woodpecker, Great Spotted Woodpecker, Nuthatch, Wren, two Robins and a couple of Greenfinches.

Getting back to London was always going to take a little while, but we at least managed to get the bus back into Hertford this time. On the way we decided we’d take the Piccadilly Line out to South Ealing Station to look for the Waxwings that have been regular a sight there recently. Jem hadn’t seen Waxwings before, but I was lucky enough to see some in Muswell Hill during the last big irruption in 2010/2011, and then – incredibly – in my hometown of Oxted on the most recent Christmas morning. The light had pretty much gone by the time we got there and so had the birds, but there were three birders still hanging around so we had a word with them. They showed us the tree that the Waxwings had been feeding from so we decided to come back the next morning.

On arriving at the station I couldn’t see any straight away, but I heard the tell-tale trilling call so I knew they were around. Firstly we saw just one alone on a branch overhanging one of the platforms, but then we realised that there were another seven high up in the same tree. We went through the station and up to street level to position ourselves for a good look when they surely visited the feeding tree. We got good views of a Mistle Trush and a male Blackcap while we waited, and then the Waxwings came over in sorties via a tall evergreen a couple of gardens back. 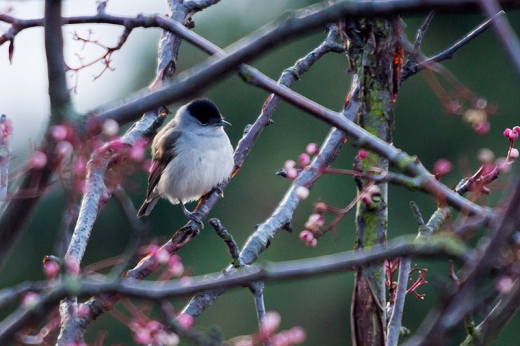 Then it was off to Hyde Park to have a look at the pair of Bearded Tits that have appeared by the Diana Memorial recently. Again, I’d seen them before but Jem hadn’t. I hadn’t had views quite as good as this before though and managed to quite easily fire off more than a hundred frames, despite the obvious interest from passers-by. I couldn’t help feeling a male bird would’ve made it an even better experience, but the females are beautiful enough as they are.

Afterwards we strolled along to Kensington Gardens to have a look for the Tawny Owls and Little Owls, but they weren’t around. We did get talking to a couple of local birders who showed exactly when and where to look for the Little Owls too though. There were also various tits to see, another Mistle Thrush, Long-tailed Tits, a Great Spotted Woodpecker and at least ten Jays. All in all this had proved to be probably the best non-guided birding weekend I’ve ever had.